Pizza first became most popular in America after soldiers stationed in Italy returned from World
War II. During the second half of the 20th century, pizza became an iconic dish of considerable
popularity in the United States.
The United States pizza restaurant industry is worth $37 billion and has an organized industry
association. The pizza is normally consumed hot (typically for lunch or dinner) but sometimes it
is eaten as cold leftovers, even for breakfast.
Since its humble beginnings in Italy, pizza has gone through numerous transformations to
become the dish that a significant number of people know and love today.
At its very core, pizza consists of three main items: sauce, toppings, and dough (or four, if you’re
like me that likes to put cheese in its own category).
Amazingly, this simple mix of ingredients has mutated into hundreds of variations with a cadre
of pizza makers and chefs who have made perfecting this single dish their life’s mission.
What type of pizza do you want? It’s a simple, common question that most pizza-loving
Americans don’t give nearly enough thought to.

Neapolitan pizza is the first pizza that left Italy and touched base with Italian immigrants in theUnited States. This is the pizza that launched the fanaticism of American pizza. In fact, Italy hassought the protection of the UNESCO heritage for Neapolitan pizza.The dough is made with wheat flour Type 00 and the crust is thin, crispy and cooked in a woodoven. The pizza should have a minimum of seasonings, perhaps the San Marzano tomatosauce, the buffalo mozzarella, and the basil because too much sauce or cheese will weigh downthe crust and make it soggy. 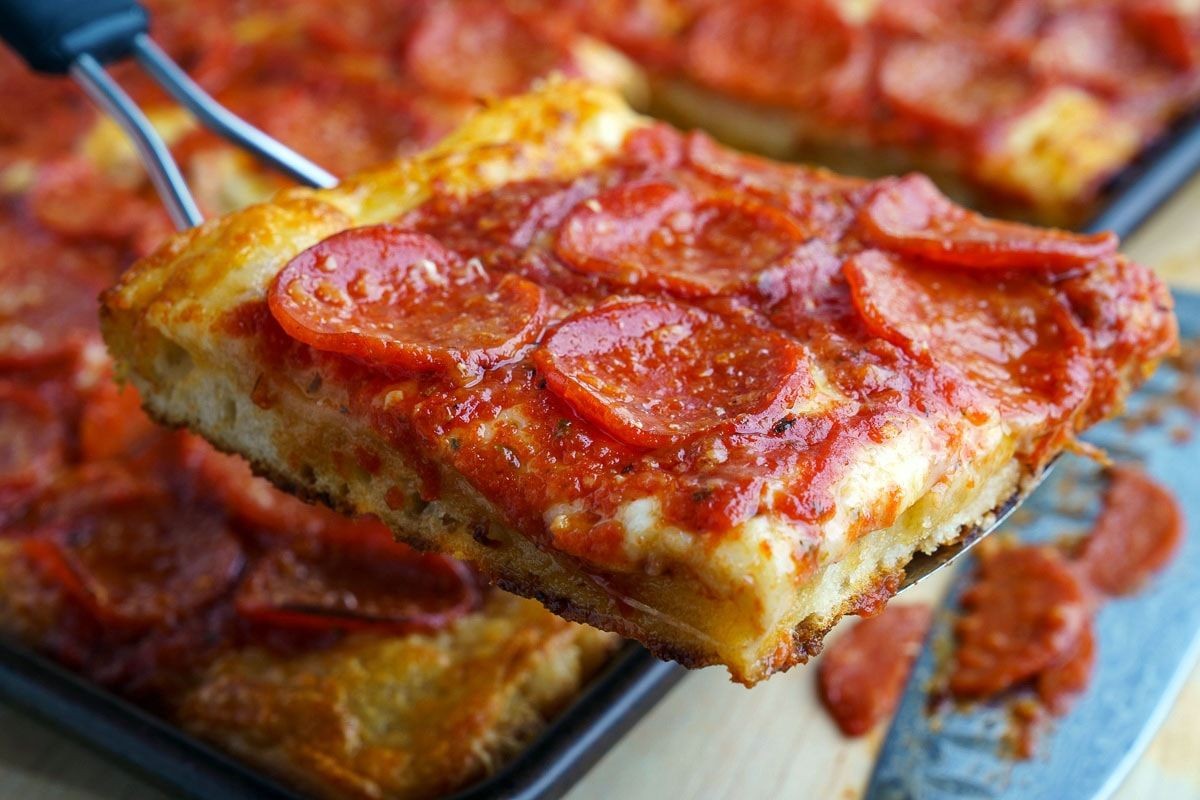 Sicilian pizza, also known as sfincione, may appear to be a distant cousin of a Chicago style pie, but the two have their differences. It’s not even the same pizza you would have in Sicily. So, what’s the problem with this complicated pizza? Well, no matter in which country you get this delicious and thick crust pizza, it should always have a spongy consistency compared to other pizzas. However, the sfincione is typically seasoned with a tomato sauce, onions, herbs, anchovies and then covered with bread crumbs. This version is typically served on holidays like Christmas and New Year in Sicily. But in America, Sicilian pizza presents a simple combination of tomato sauce and mozzarella and is consumed throughout the year. 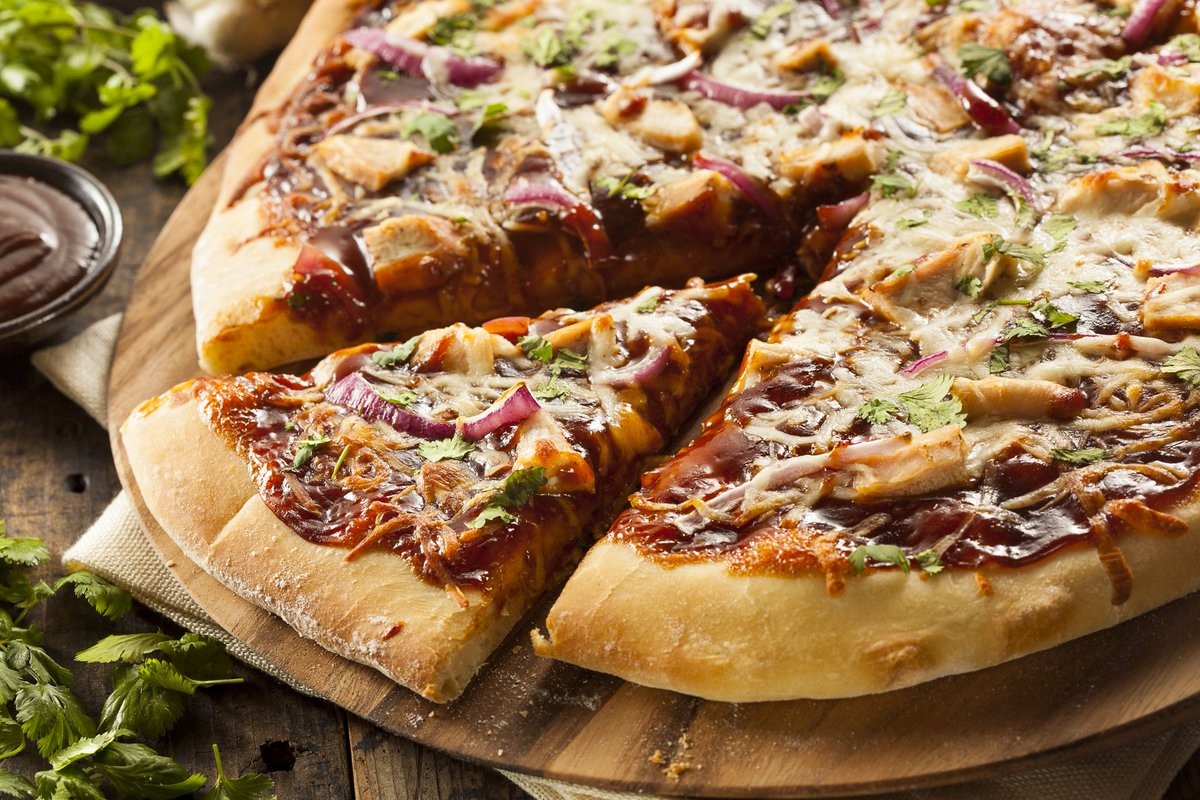 Californian-style pizza uses a Neapolitan or New York-style pizza-based pasta base and jazzes the base with unusual and uncommon ingredients. This style of pizza is generally attributed to the chef Ed LaDou who developed a pizza with ricotta, red peppers, mustard and paté, which chef Wolfgang Puck tried and loved in the early 80s. Chef Puck immediately employed chef LaDou to work at the newly opened Spago in 1982 and chef LaDou continued to create innovative pizzas, incorporating varieties with duck sausage and smoked salmon. In 1985, chef LaDou created the first pizza menu for California Pizza Kitchen, including his signature grilled chicken pizza, which spread California-style pizza to a national audience. 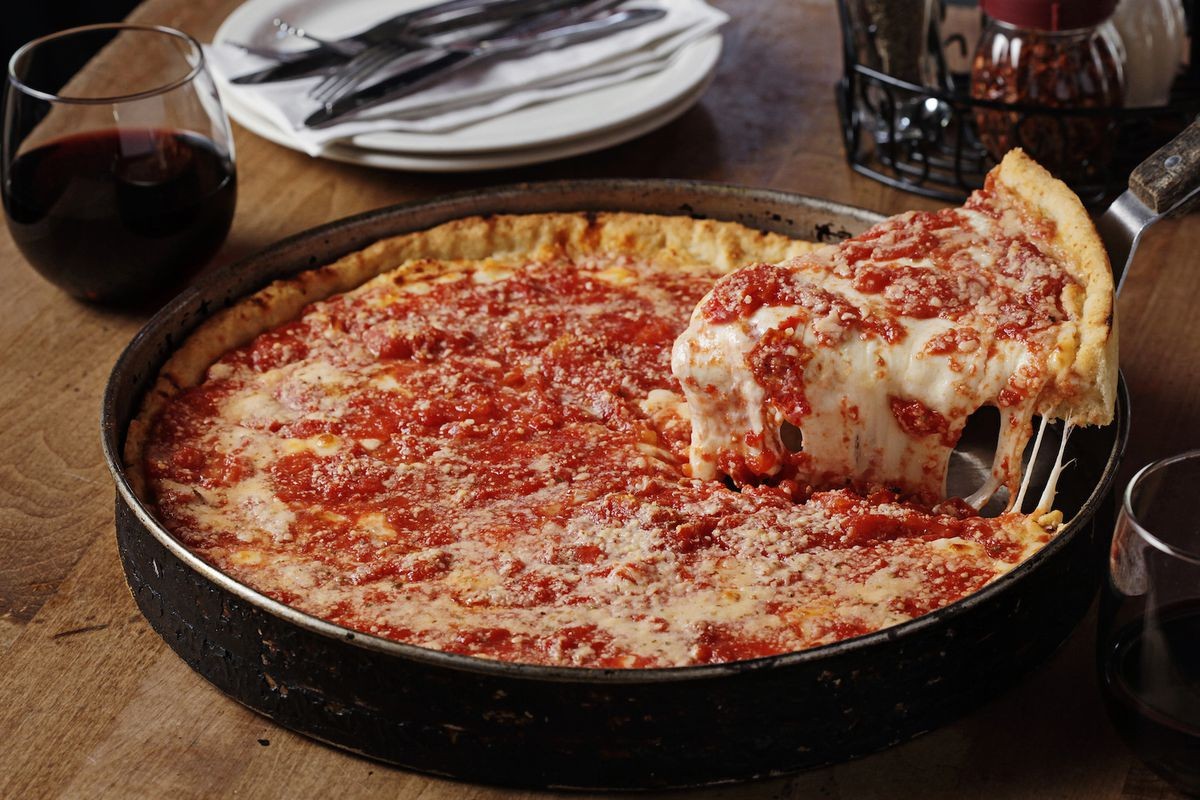 In the 40s, Pizzeria Uno in Chicago developed the deep pizza, which has a deep crust that forms a deep dish, similar to a large metal cake or a pan. Even though the whole pizza is quite thick, the crust itself is only thick from thin to medium, and the pizza has a very thick layer of toppings. Because the pizza is so thick, it requires a long cooking time and, if the cheese has been added on top, as usual with most of the pizzas, the cheese would burn.

So, in a deep pizza, condiments are usually assembled “upside down” with cheese, vegetables, and meat placed over the crust and a raw tomato sauce on the top layer, to help vegetables and meat cook all the way through the oven.

In the mid-1970s, Chicago restaurants Lou Malnati’s Pizzeria and Giordano’s Pizzeria developed a variant of the deep dish pizza, known as the stuffed pizza, which is even deeper and has a broader topping density than any other type of pizza. To keep the cheese and the toppings contained, add a thin layer of dough over the tomato sauce with a hole in the crust (similar to a pie) to let the steam escape and add the tomato sauce over the top crust. 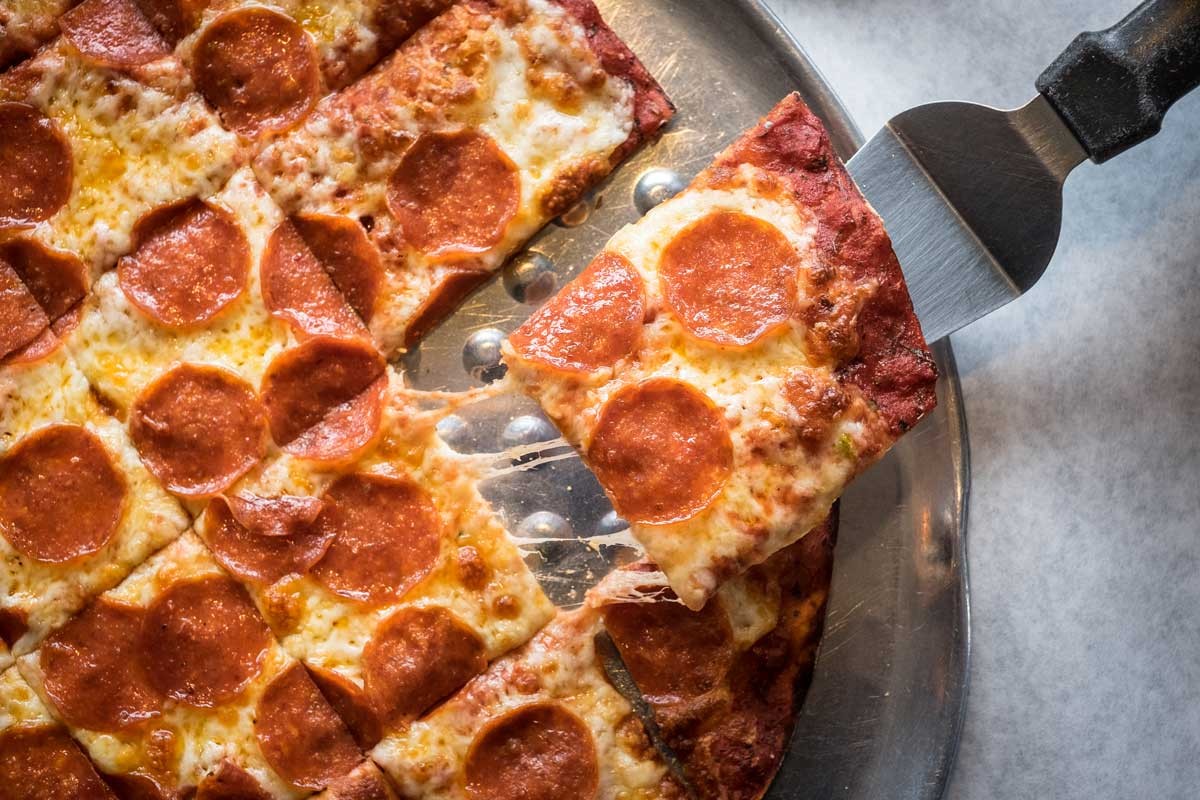 The thin crust of Chicago is more crispy and crunchier than the New York style and usually cuts into squares (or cut-away taverns) rather than diagonal slices. The area of Quad City, a group of five cities between Iowa and Illinois, has developed a subtle variation of Chicago crust that uses a spicy sauce, a huge amount of meat and is cut into strips or squares. 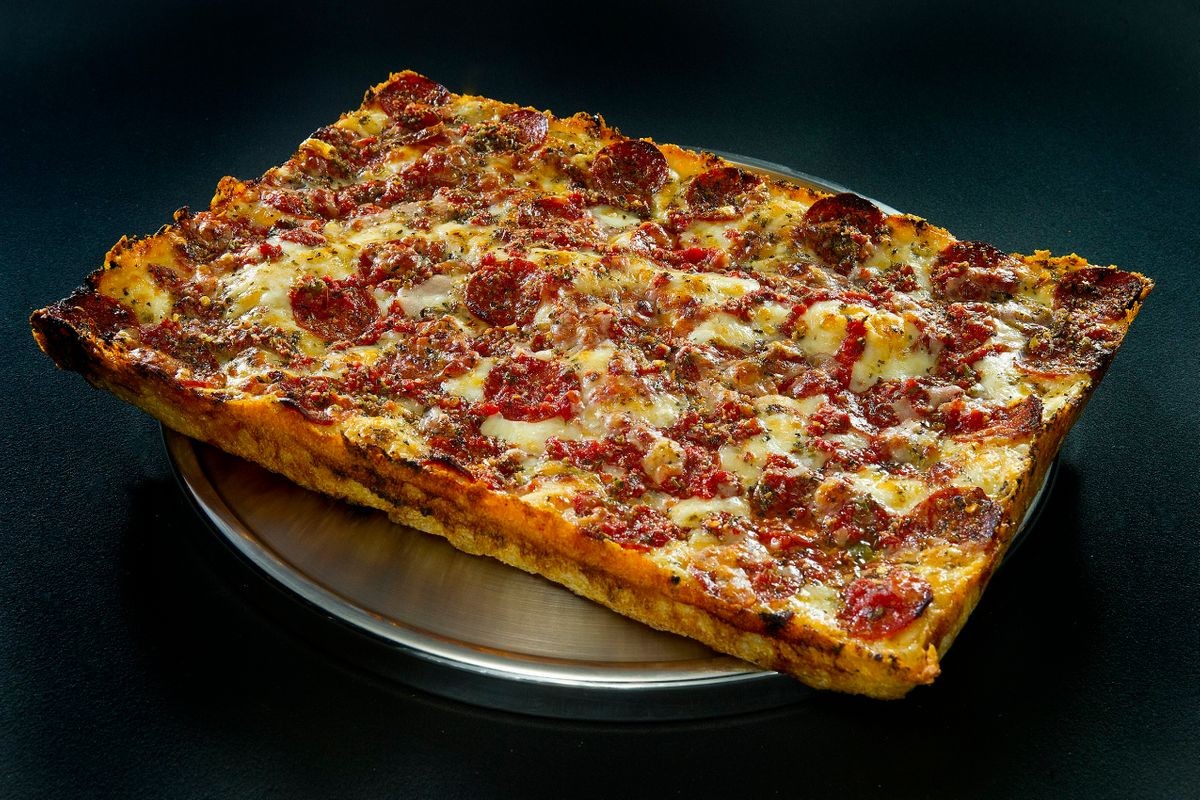 The Detroit style pizza is a square pizza, similar to Sicilian style pizza, with a deep plate crust and marinara sauce sometimes served on top. The crust is usually cooked in a well-oiled pan to develop caramelized crisp edges. Detroit-style pizza has developed a broader fan base with Detroit-based Little Caesars, who has launched a Detroit-style deep dish pizza available in its national chains. 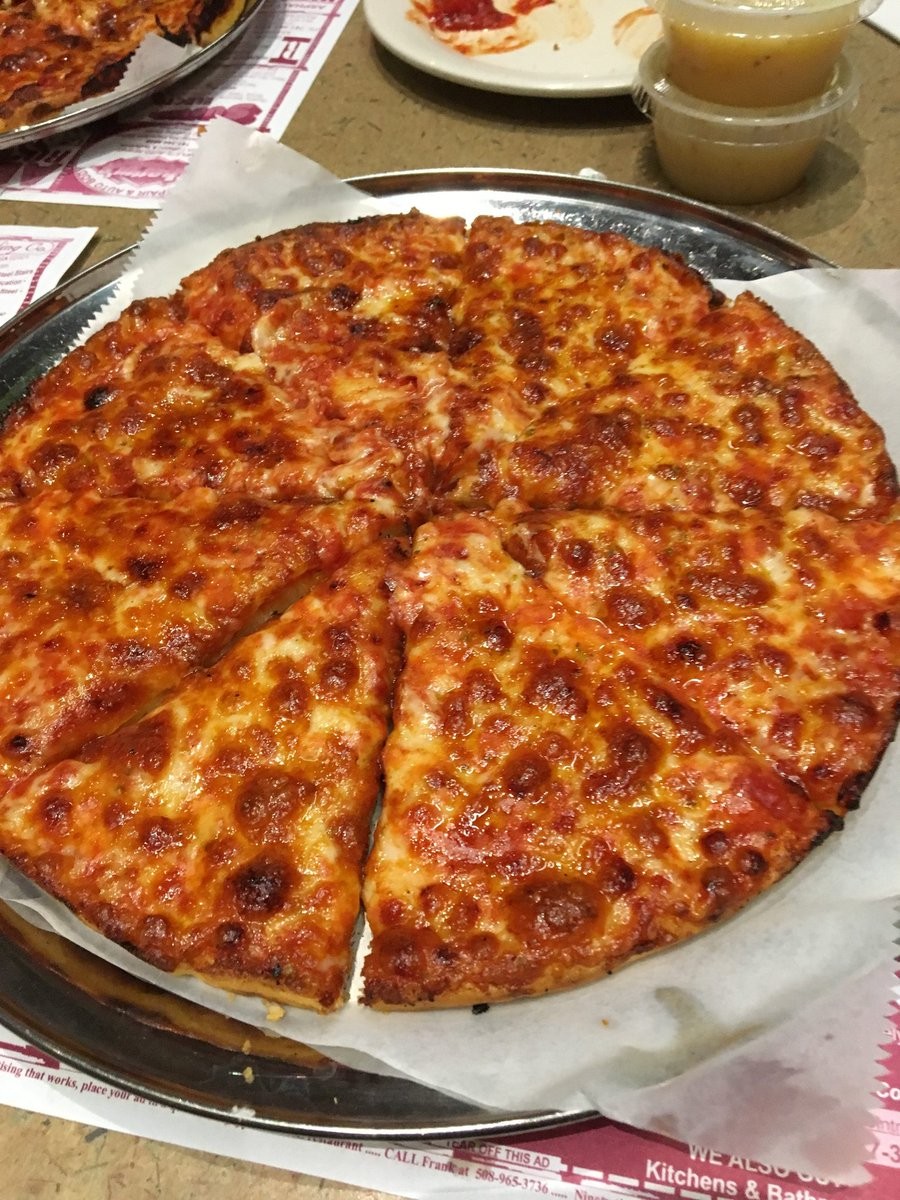 Greek style pizza is normally referred to the pizza served at Houses of Pizza, run by the Greek immigrants in New England. The pizza crust is found between the crunchy New York style pizza and its Sicilian cousin more often and is cooked in a heavily greased cake or in a cast-iron pan, which translates into a thick golden crispy crust. Many of these pizzas are seasoned with typical Greek ingredients, such as feta, artichokes and kalamata olives, although a Greek pizza can simply be topped with tomato sauce and mozzarella. 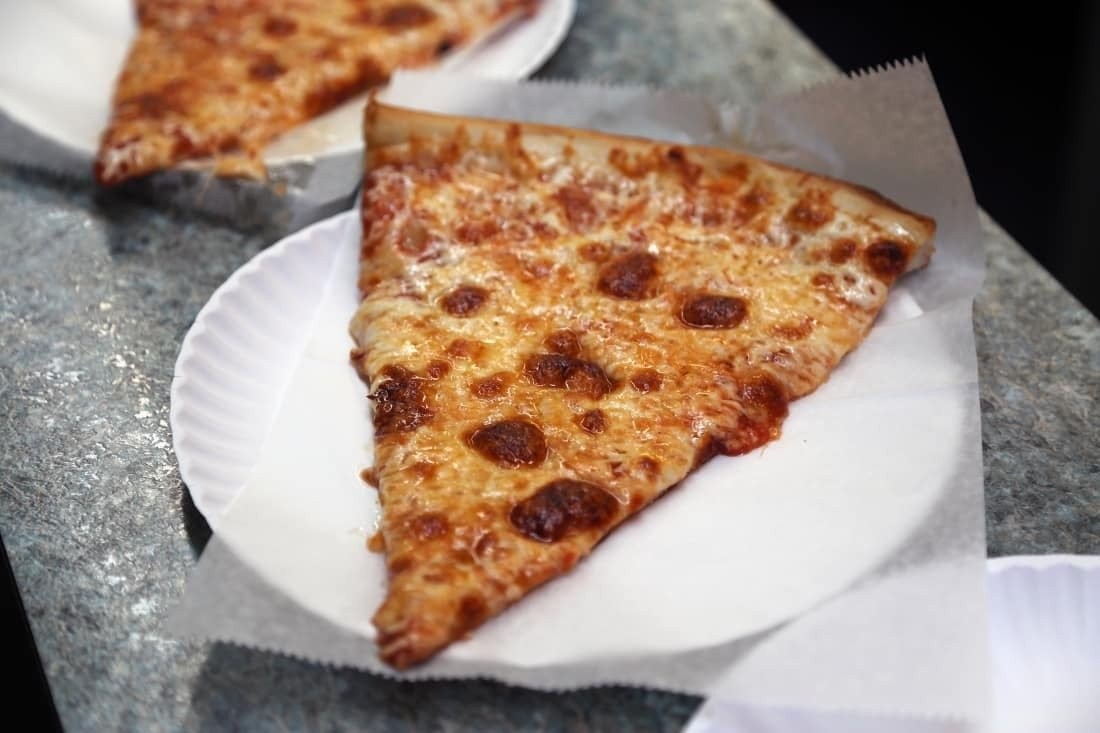 The New York style pizza was born in New York in the early 1900s and is a mild bastardization of Neapolitan pizza. The pizza has a thin crispy crust with a perfect balance of thin tomato sauce and lots of grated mozzarellas. Pizza is designed to be folded when eaten. Most pizzerias in the United States tend to serve a New York style pizza shape. 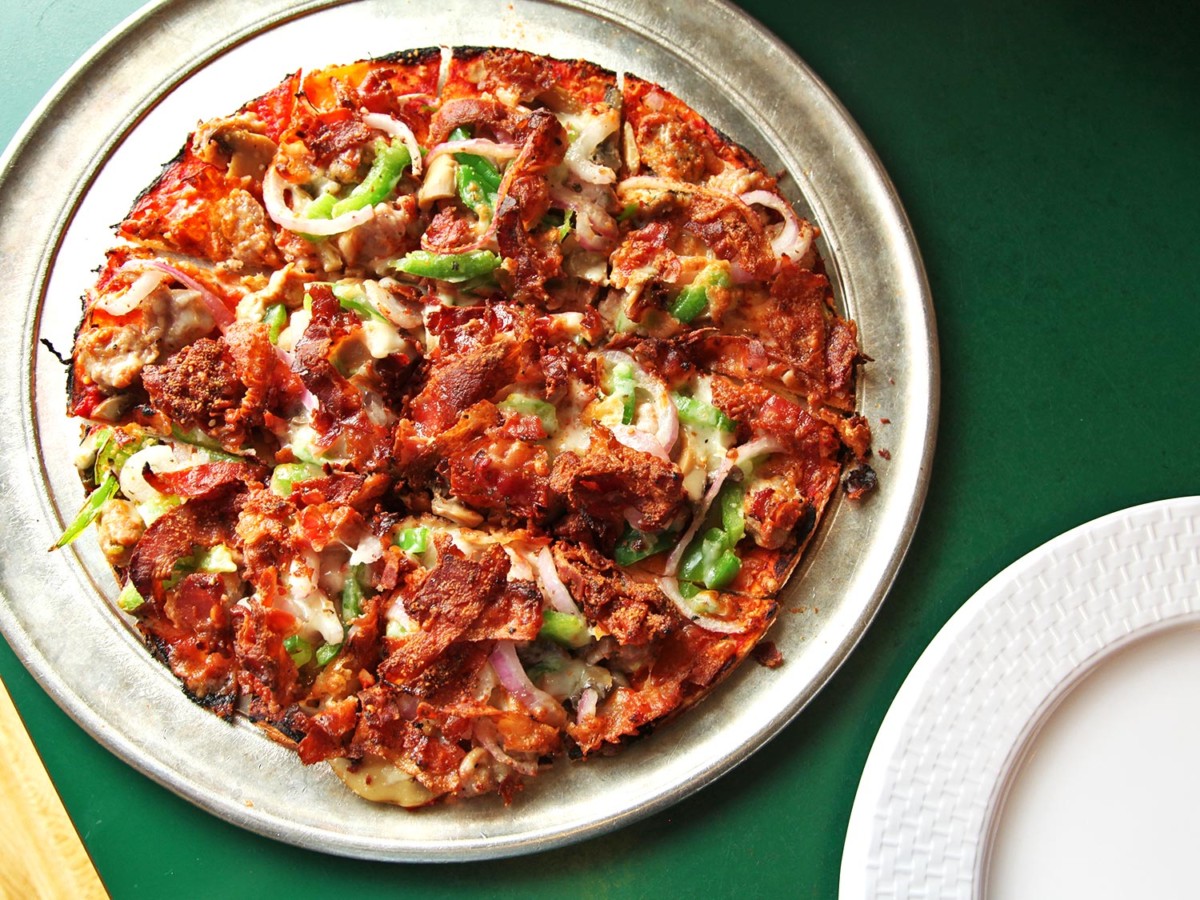 The St. Louis style pizza, a unique example of New York style pizza, was born in the ’60s by Ed and Margie Imo of Imo’s Pizzeria. The pizza has a thin crust similar to a cracker, made without yeast, and is topped with Provel cheese rather than mozzarella. The Provel cheese is a white-paste cheese, produced by combining cheddar, mozzarella, and provolone cheese and used mainly in the St. Louis area. 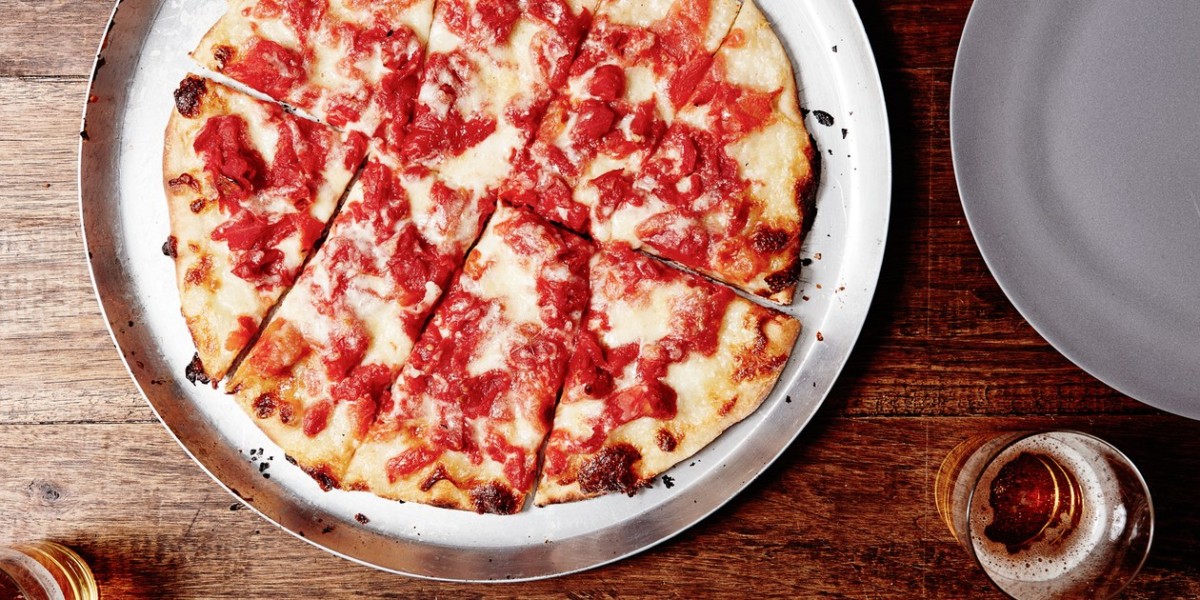 The tomato pie is a type of pizza created in the early 1900s by Italian-Americans in the metropolitan area of Philadelphia. Papa’s Tomato Pies, in the Trenton area of New Jersey, claims to be the second oldest pizzeria in the United States. Unlike the New York style pizza, where cheese and condiments are placed over the sauce, in the tomato pie, the cheese and fillings are placed under the tomato sauce. Because of this differentiation, the dominant flavor of pizza is the sweet and sour tomatoes that make the pie.